It's summertime, and the livin' should be easy.

I expect it will be in this part of the world.

All you have to do is think about "How green is our valley." 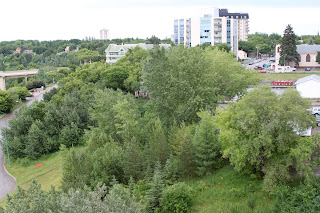 This is across the street, east of our apartment. You can see a number of condominia behind the trees, and far off in the distance, a 22 story senior's complex. Its about 20 stories higher than the surrounding homes. The home owners fought the development some 40 years ago, arguing that something 22 stories tall was totally out of character with the neighbourhood — which was true. City Council allowed the project to go ahead.
Also, on the right side, near the top you'll see the old Westminster United Church (Presbyterian before it was United). It was sold when the folks at Westminster amalgamated with Grace United (formerly Grace Methodist) — which was named after one of the early church leaders, Grace Fletcher. Westminster has been owned by several church groups; the current congregation is trying to sell the building. It's a big barn of a place, and I suspect it costs a lot of money to operate, particular to heat in the winter. 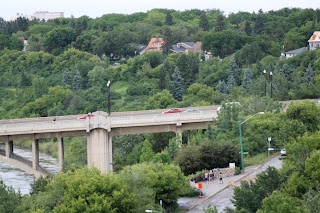 This is just a bit further up the river bank. The houses you can see in the midst of the urban forest are on Saskatchewan Crescent — a premier address in the early days of the city (and still trying to keep up). There are huge homes up there. HUGE!


The bridge in the foreground, the Broadway Bridge, is one of seven bridges in River City (eight, if you count the one currently under construction). It was built in the 1930s. It was a depression era bridge, built as a "relief" project — you had to be a married man to work on it (i.e., someone with family responsibilities). 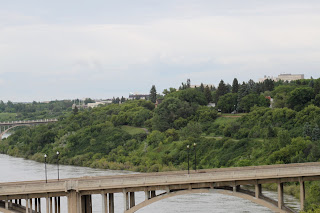 The north end of downtown is on the left or west side of the river (and out of the picture). The University Bridge is there, north of the Broadway. University Bridge was designed by an early class of engineers at the University of Saskatchewan, which takes up the east side of the river bank, and runs further east for miles. The one building you can see clearly, in the upper right, is the Arts Tower. It has numerous classrooms and offices used by those in the College of Arts. Less clearly visible is part of Royal University Hospital — long-time teaching hospital, which provided (and still provides) the best care in the Province.

So, that's our view of the valley on Summer Solstice Day, 2011. Solstice, btw, arrived at 1:16 p.m.. I would have taken the pictures then, but there was a mammoth rain shower in progress. Something like a giant fire hose that was spraying water all over the city, trying to extinguish a great mass of tree and grass fire. (Trees and grass, yes; on fire, no.)

Right across the river, to the north, . . . but that's tommorow's story.

Also brought to you by the letter S:
• surreptitious
• sizzling
• supple
• strange (like the Bear)
• sartiorial

And from the New Phonetic Alphabet, S for Williams.

You know, one of Portland's nicknames is River City. Thanks for taking me on a tour of your place :)

I love the big old houses along Sask Crescent. They had class and character. Great pictures.
8 bridges? When I was a student, there were three. The old steel bridge, Broadway and University. Then they added Idlewyld (sp?) and much later 42nd street makes five. They built a new one north of 42nd street, I think but am not sure. Where are the others?

What a wonderful summer solstice tour in a very green city. I hope that you are enjoying the long days of warmth and sun... Your winter should be a distant memory now.

Lovely touring with you :o)

® Rosaria: Yes, and yes. Thanks for visiting.

® Diva: Didn't know that about Portland. Thanks for the tip. And thanks for coming on the trip.

® BF: The old houses are truly grand. I think I could live in just about any one of them.
Eight Bridges: Senator Sid Buckwold (formerly Idylwyld), Traffic (the old steel one, right beside our place), Broadway, University, Circle Drive (42nd St.). The two railway bridges — beside 33rd St on the west side, which is CP, and in the south end. The newest vehicle bridge is being built beside the south railway (CN) bridge.

What a lovely view you have!

Wow you have really great views and how wonderful to see bridges, homes and greenery. Hope you're settling in now...it does take a while, you feel bit discombobulated for a while...Sereptitous (sp)is one of my favourite words, very elegant way of saying sneaky!

® Genie: Solstice was great, but it rained a whole lot! The nice summer weather is here (sot of), though the weather guy makes it sound like monsoon season, and there is flooding almost everywhere.
Winter. That's when Tony or Danni will get the snow blower out. I won't have to do anything.

® Wendy: If you want to come for a more personal tour, bring your hubs and kids for a Canadian visit and barbie.

® Nancy: Thanks. But I've only shown you part of the veiw.

So different from the surroundings where I live. These photos reminded me a little of France for some reason. A great mix or urban and countryside.

You're in Saskatchewan? I've not been there. I've visited Vancouver, Jasper Natl Park, Nanaimo (SP?), Edmonton, Calgary, Banff, Montreal...all at different times in my life. My father represented many original Canadian radio stations as well as the old Global Television network. I have to think of the call letters of his stations in Saskatchewan. They will come to me. He had stations in every province but PEI.

How I wish it were getting to be summer here in NZ! Lovely tour.