Nature sheds her garment in the breeze. 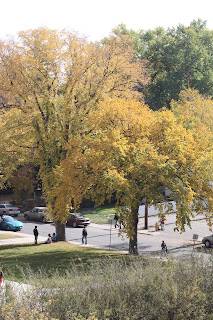 IT'S ALL ROSARIA'S FAULT

That would be Rosaria at sixtyfivewhatnow.

Before I go any further, I need to set this in a bit of context. There is a magnet on our daughter's fridge door, which says:


I didn't say it was your fault,
I said I was going to blame you.

Anyhow, Rosaria recently raised an interesting issue. Is blogging a real "regimen." (Regimen being defined as a "way of life," among other things.) Do we live to blog, or blog to live, or a bit of both. To what extent are our lives directed by our blogging? Interesting questions, those.

The final of five questions was the most interesting. What would I be doing if I were not blogging? The only thing I could think of was writing, somewhere or other.

Having written to earn my living for a lot of years (30+), writing is natural for this Bear. That doesn't mean I'm a particularly good writer; it just means I do a lot of it. And I did, indeed, get paid for it.

Which is why I'm involved in tying to start an independent news co-operative here in River City.

Do you notice that television networks pretty much have the same news? That you get the about same stories on CBS, ABC, and CBS? That the same stories appear on local radio or television stations? Well, it happens. I know, because I was in that game for years.

What would happen if you had an outlet which carried very different news, or news from a very different perspective? What if it reported on stories with which the "big stations" would not bother? You're starting to get the idea.

The Media Co-op is a national news cooperative in Canada, which publishes different kinds of stories all the time.  There are active locals in four Canadian cities, and "Working Groups" that are trying to establish locals in a number of other places. All in an effort to give people news they would not get otherwise.

This is another project to keep Bear from being bored. A bored Bear in an unhappy Bear. An unhappy Bear is a dangerous Bear.

But it is more than that. It is an attempt to see if we can sustain a solid, independent news outlet in River City (and thereabouts). It's a plan to see if "alternate" news is what people want.

THIS IS THE SUMMER THAT WAS, 2012 VERSION

Summer, in this case, was July and August. Not the total of summer, but close enough, at least the way most Humans figure it. Now it is September. High temperatures are around 15°C (59F); lows around 5C (41F).

So, what happened this summer?

Actually, a fair number of things.
• helped to host half a dozen (or more) sleepovers for our grandchildren at our place
• read lots to the grandchildren when they came, and when we went to their place
• visited my local library numerous times
• read quite a bit
• ate a lot
• took lots of pictures (you've seen the best)
• drank coffee semi-regularly for a while (though I cannot say I really enjoy it — so I went back to drinking tea)
• drove out to the country three times
• watched birds come and go
• celebrated J's birthday
• celebrated our 43 wedding anniversary
• spent time with good friends, but not often enough
• swam in our apartment's swimming pool a couple of times
• started walking daily (about a kilometre, sometimes more), most days
• worked on creating an independent news co-operative
• helped to get Occupy Saskatoon going again
• worked on research ethics approvals
• drank no wine or spirits, but tea (and coffee, as mentioned above)

I'm sure I've forgotten some events/activities, but that's what I can remember, for now.

Yeah, no major shortage of things to do. But still prone to depression. Building up a schedule of activities for the fall. Yes, you will hear about them. Of course.