BEAR HAS MOVED ON.

If you're looking for me,  I'm not here.

I have moved to Bears Noting, my old blog.

Blessings and Bear hugs to all!

Water on my head.

Wait a minute. There's nobody else here!

Snif. Snif. Although the place does smell a bit of coyote. Peculiar. I had a dream that a coyote had come to visit me. Strange; very strange. Do you ever have a dream, when you're starting to wake up, and you're not sure if it's a dream or something more tangible? Strange. Odd. Puzzling.

Must mean my roof is leaking.

Which means snow is melting outside.

Scramble. Crawl. Lurch towards to opening of my den.

The sun is bright, but not blinding. Sky is blue and cloudless, with a bit of haze on the horizon. The snow is melting; I can see lots of snirt. ("Snirt": that's a Canadian word, meaning a mixture of snow and dirt — a good thing at this time of year.)  The air is fresh. Moreover, it smells like spring. Aaaaaaah!

You need to understand that smell is very important to us Bears. (Or is it "we Bears"?) It is also very keen. As per the the following First Nation's (Indian, Aboriginal) story.

A pine needle fell from a tree in the forest.
The Eagle saw it.
The Deer heard it.
The Bear smelled it.

(A story about the relative strengths of certain Critters. The Eagle's strong eyes see just about everything. The Deer's ears, always up and twitching, pick up almost every sound. And he Bear's nose — well, we've been through that.)

So, back to the routine of non-winter living?

Decision time. Do I go back to sleep or start looking for food? Actually, I'm feeling hungry. I think I can smell some fresh grass, and some berries.

Crawl. Squeeze. And I'm . . . out of the den. Strange, though. It was a lot easier getting out this spring than it was getting in last autumn. Why is that? Did the hole get bigger?

Now, to find the foxes who wanted to rent my place for a family home over the summer. I'll check on them after something to eat. From the sun, I'd say it is too late for lunch, but too early for supper. It will be "lupper." (Another Canadian word; mid-afternoon meal between lunch and supper — the afternoon equivalent of "brunch.")


Changes in My Life

But I'm going to be doing things differently this year. This blog is going into archive. I don't live on the range anymore. I live in the urban forest, in a cave ablve the tree tops (which is also related to the title of my poetry blog, called Life in the Urban Forest). More important, I want to talk about what Bears Noting in the world, particularly the urban world. So that is where you will find me — at Bears Noting — my original blog.

For those of you who have been following me around and about in my adventures on the range — thank you very much for keeping me company, and adding your own delights to my journey. I invite you to join me at Bears Noting, where you are most welcome. You'll find the same kind of writing there which you have found here — more or less. I will certainly try to keep my posts Bear-able for Humans.

The other thing you can be Noting is that in April, based in Bears Noting, Bear will undertake to participate in the annual A-Z Challenge (if they hold it again). That means blogging almost every day — which will be very challenging and should keep me busy and out of trouble. (Bear, who are you kidding? The regular readers all know you can get into "interesting situations" at the drop of a hat.)

So, now for our moving adventure to Bears Noting.

And while I'm thinking, maybe I'll spend part of the summer at my tent on Blogland Lane. Too early to settle on that, though. Just a thought.

Blessings and Bear hugs, as always! (Now, where are those berries?)

P.S.: If you're looking for my above-mentioned poetry blog, it's here. I don't write that much poetry, but some people like what I do, so I keep doing it. And I always keep hoping to do more.

I GOT A SHOCK TODAY

Actually, I got a couple.

My friend Nick was there, nose almost touching my face. (For those who let their Dogs sleep on the bed, this may be a somewhat customary experience. In my case, no!)

Talk about waking up with a shock! And the worst case of "spring breath" I've smelled in years! He hasn't been eating well.

So I screamed, "Nick! What are you doing! Are you trying to scare me to death!"

Nick apologized, saying he was just checking to see if I was awake. I assured him that I was. Now.

After I got over my shock, I mentioned I as feeling hungry. Nick looked askance.

"Don't worry, old friend," I said. "I won't eat you. I had something about the size of a Squirrel in mind. Nothing too big for my first meal."

Nick understood that; he nodded his head.

"So what's it like outside?" I asked, because my cave did not appear to be too bright.

"Well," said Nick, "not so great. Check it out for yourself."

And so I did. Scramble. Crawl. Pull myself to the door.

Snout out. Which led to my second surprise.

He replied, "You've got a heavy Bearskin coat; I've only got a Dog coat. Obviously things are going to feel different for you than for me. So I thought you could decide for yourself what it's like."

Now, Nick is pretty bright; I'll give him that. And he's kind and helpful, despite your image of a Coyote. But his social skills are — how can I put this nicely — in need of considerable refinement.

"You woke me up for nothing," I said, as I crawled back into bed." I'm waiting for Spring."

"But today is the first day of Spring," he replied. "I thought you would feel it in your bones."

I pondered the situation a bit and finally said, "I'm going to try to get back into hibernation. It doesn't feel like spring out there, at all." I think I sounded a bit cross.

Nick paused for a moment. I knew he had something on his mind. He has this certain look. Probably going to ask for a scrap of food, though there's nothing here.

"Um, well, if you're going back into hibernation, can I stay and sleep here for a bit? I'm sure your Bearskin coat would be nice and warm."

About what I expected. Bear and Coyote sharing a bed. Think Lion and Lamb. Well, OK; not so much.

"Whatever," I said and rolled over. Nick snuggled up against my back.

But it's so late, I wonder if I'll get back into hibernation mode. Especially with a Coyote sleeping beside me. Good grief; a canine on my bed.

HMMMM; THIS IS INTERESTING

Could it be spring? Bright enough for spring. Yet, it doesn't smell like spring. (But then, truth be told, I'm a more senior Bear, and my smeller doesn't function quite as well as it used to.)

I'll stick out my snout and check.

Crawl. Wiggle. Scramble. Slide. To the entrance of my winter den.

The sun blinds me!

The sun in the sky blinds me!

The sun reflecting off the snow blinds me!

No wonder I couldn't smell spring; it's still the middle of winter!

Back to bed; back to hibernating.

Yawn. Stretch. Shake. Roll. Scratch. Crawl to the mouth of my cave. Bright sunlight; almost blinding — being reflected off the snow.

By the way, Groundhogs know the square root of zip about weather and the coming of spring. You want to know when spring starts? It starts when Bears quit hibernating. You can trust me on that.

Stretch again. Scratch my back on the ground. Shake and settle back in. Grrrrzzzz . . .
Posted by Rob-bear at 10:59 PM 28 comments:


Blessings and Bear hugs from Canadian friends (human and ursine) in the wake of the horrid tragedy in Newtown. That's about all we can do, but it is the one thing we can do.

IN WHICH BEAR GETS "BOUNCED," AND SUFFERS ONGOING PROBLEMS

The story is told (by A. A. Milne) of how a Strange Creature arrived one day at the Hundred Acre Wood. The "Forest" was the home of Pooh Bear, Piglet, Eeyore, and many others. The Strange Creature turned out to be Tigger, a Tiger, who was a friend of Christopher Robin.

Having a Tigger was not such a problem, except for one thing. Tigger was very Bouncy. And that disturbed the other characters in the Forest, particularly Rabbit. (In fact, Rabbit, Pooh, and Piglet developed a plan to Unbounce Tigger — it didn't work.)

All this is preface to my experience of being Bounced, as surely as if Tigger had landed on my bed first thing in the morning.

There was a meeting of the Animal Research Ethics Board last Wednesday at the University. The Board needs a couple of Community Representatives when it is going about its work. It's a matter of Transparency and Accountability — which are both Very Important Things. And, well, yes . . .  I needed to be there. This, just after I had finally settled into Hibernation mode. And, well, yes . . . I got a reminder. The "ping" on my e-mail program woke me with a start; that's always unsettling! And, well, yes . . . I did go to the meeting (though I warned them at the outset that I was a tired and grouchy Bear).

Now it is almost a week later, and my heart rate and breathing rate are nowhere close to Hibernation levels. Woe is me! I toss and turn, and am not comfortable.

The situation has not been a total loss. Someone came along and painted the whole scene outside with hoar frost. Rather like a faerie wonderland. 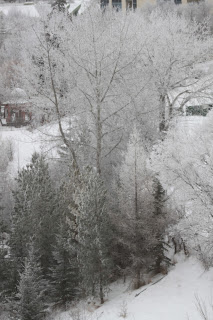 All quite nice, actually. 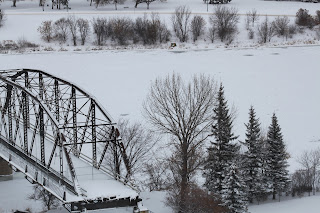 Yes, the scenery is delightfully wintry.

But I'm stil not back to Hibernating!