NO, it is not going away.

We could have as much as 15 centimeters (6 inches) come down on us tonight and tomorrow.

So, Merry Christmas, everyone!

THE DAY THEY TORE THE OLD BRIDGE DOWN

The destruction of Saskatoon's historic Traffic Bridge hit full stride this morning. And though the bridge may be going, the politics about it continue.

The bridge, opened in 1907, was Saskatoon's first bridge for horses, wagons, pedestrians, and automobiles. It was closed in 2010, after suffering from neglect for decades.

The demolition began earlier this month, though preliminary work turned last week to stripping the wood and asphalt deck off the south end.


Once the deck had been completely removed, the temporary supports below the bridge were removed, and the foundation at the south end of the bridge was pulled out, allowing that end of the section to collapse.


After that, an excavator's giant "lobster claw" chewed the heavy steel on the bridge apart, like it was cutting through tin. 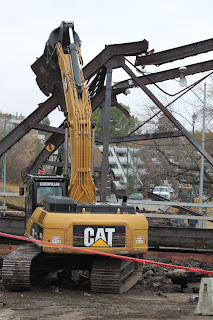 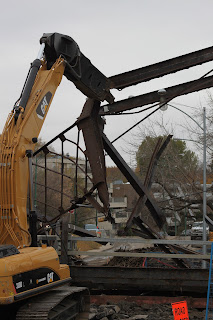 But this is neither the end of the bridge, nor the politics surrounding it.

The Traffic Bridge was central to the formation of the City, uniting Nutana and Riversdale with Saskatoon. One of the conditions on which Nutana insisted was that a bridge be built connecting the two sides of the river. This would replace the unreliable ferry which was being used at the time.

The portion of the bridge which is being demolished now is only one of five spans. The cost of demolishing this part is $500,000. But the other four spans are over water, meaning the challenge will be much greater. You cannot just let the steel fall into the river. Especially with all its lead-based paint.

And the kind of replacement may still be debatable. When City Council asked citizens for their input, the top priority was for a pedestrian and cycling link. Council, led by Mayor Don Atcheson, simply ignored that recommendation, and went on to other things. By a vote of 8 - 3, Council decided on a multi-use structure, including cars, bicycles, and pedestrians. Atcheson still thinks that was the right decision, even though Council has yet to find the $30 million required.

Mayoral challenger Tom Wolfe has other ideas. He says Council's action is a sign of its mistrust of public opinion. He says because Council ignored the outcome of the citizen consultation, he thinks the mater is open for review. After all, if Council didn't want a bycicle-pedestrian bridge, why did it not say so at the beginning of the consultation? Moreover, Wolfe says, when the new south bridge opens, likely this fall, that structure will relieve congestion on the existing bridges.

The demolition of the Traffic Bridge will continue, with no replacement in sight. And the nature of the replacement may get a lot more discussion.

The Temperature went down to - 5°C (or 23F) overnight. Yup; it's getting cool. And we are seeing more grey sky. 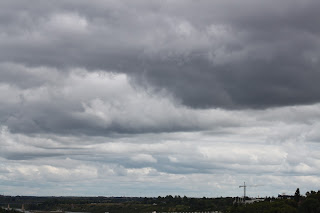 The trees which had golden leaves are now sporting brown, and the few trees which still have green seem to be going to brown without hitting gold first. 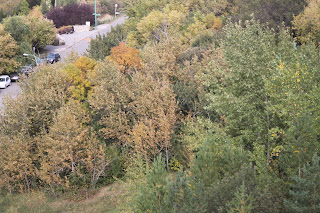 All the leaves are brown
and the sky is grey
[River City] dreaming
on such an [autumn] day.

(With apologies to the Mommas and the Papas.)

The sign of things to come. What a perfectly dismal time of year for an election.

Blessings and Bear hugs.
Posted by Rob-bear at 7:54 PM 32 comments: