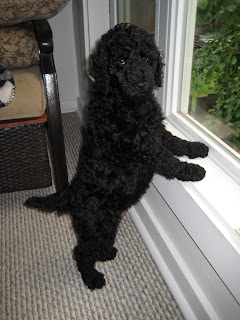 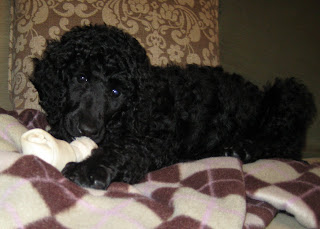 They are beautiful babes. Certainly will keep you on your toes.

What adorable puppies. I envy you somewhat, but not the house training! Looking forward to the updates.

Lovely news Rob Bear - congratulations on the new additions. They look gorgeous. Our cavoodle (poodle, cavalier spaniel mix) had his first birthday last week and has become very much a major part of our family! Looking forward to hearing how Nuala and Sadie settle in.
Sumarell.

Welcome to the girls! They are lovely....just the thing to cheer up big ol' bears and Mrs Bears.xx♥

You are so witty, and have a great grip on so much that passes each day for life.

Those twins are beauts!

Thanks mountainear, Celtic Heart, sumarell and Natsy. Yes, this is going to be "interesting." We have had two other Standard Poodles, so we pretty much know what to expect from our dogs. The challenge this time is with two of them coming at the same time, and their "sibling rivalry."

Ten pounds at two months. How big do they get? They will keep you young. Very beautiful dogs. Not sure how sisters will react to each other over time. Hopefully, less violent than my two brother mutts.
Frances, you are half right, anyhow

They are splendid. I like the rancher story at the bottom of the page.

There's cute!Heaps of congratulations from me too

A goat? One goat? Our town is full of goats...and cows and pigs and chickens and ducks and geese and dogs and cats and...

® Thanks also, Francis, for your kind remarks. Because they're cute, they'll probably think they can get away with anything!

® True, Blog Fodder. But how many goats were you allowed to keep in your back yard in Regina? Some communities are not as "advanced" as others.

SORRY for getting behind in my "Thank yous." And for the fact that things are a bit out of sequence.

® Thanks, potsoc for the greetings. Glad you liked the story. Do you remember the old "Weekend" insert in the Toronto Telegram (and maybe some other papers)? That was the source. (Yes; I AM that old -- or ancient.)

® Thanks for the congrats, mollyglover.

® Blog Fodder: our puppies dad weighed about 80 pounds! Mom wasn't quite that big; I've met her. A male poodle easily can be around 50 pounds, or more; females 35 pounds and up. And you wonder why the French use them for police dogs? True story; not kidding this time.

And, for the record, sisters tend to be very competitive. They're "puppy fighting" now, but that will get nastier. We're working on breaking the sibling rivalry. Trying to pull two, 35 pound dogs apart is not for the faint of heart (or those who value their hands and arms). Got the picture?

Hi Rob-bear. May I add my congratulations. I thought they were Newfies at first. Difficult to judge the size and that same intense black coat.
Really beautiful. Have fun.

They look beautiful and I am sure that we are going to see and hear a lot about them!

They are precious. Enjoy.

® They are indeed, lakeviewer. Just like your family, with whom I trust you've had a great holiday. And we are enjoying our "babies."

So you gave birth, that's where you've been hiding. What beautiful poodles. I had a toy black poodle growing up. Named him Apollo. I love poodles, although they require lots of grooming.
Congratulations.

® Thanks, Fennie. Newfies are wonderful dogs, but would way too big for our house. Plus they would eat us out of house and home. Poodles fit in just fine; we'll have fun with these baby "Bears."

® Sonia: Thanks very much. We've not had much problem grooming our previous poodles. But that's because we had them trimmed to look like dogs, not fru-frus on four legs. We've also had a smaller poodle, but we prefer the bigger dogs. Glad you had fun with Apollo.

Will one of these make it over the border? I would like to have one.

Have fun with these lovelies!

Rob-bear the bear cubs are gorgeous. So clever how you have disguised them.

You are welcome in my home any time.

® SD Momma: The only animals that get a "free pass" from Homeland Security are Canada Geese. If I tried to bring one of the puppies across, it would probably be arrested as a terrorist. They do, after all, cause quite a bit of "terror" in our household!

® Renee: Thanks for the note about the cubs and their disguise. Love to visit; might even try to bring the puppies. Blessings to all of you in your joutnies of healing.

awww puppies! sounds like you're a proud papa! now it's time to toilet train!

® Cheshire Wife: I missed you in the shuffle -- terribly sorry! Thanks for the note, and you will hear of them.

® bella: Yes, it's exciting to have them around. They've been here about a week, and they're getting themselves pretty much house trained. (Which is to say they're getting us well-trained in relation to their needs.)

That's a pair of poppets Bear. Have fun - it's when the chewing begins the world as you knew it ends!
CKx

Thank you for seeing them as "accidents" but in all actuality it's because they ain't got no thumbs and can't reach the doorknob.