Subtitle: “In which Bear Survives a Storm, Celebrates Canada Day, and Does Well in a Poetry Contest.”

As famed Canadian poet Robert Service put it, "There are strange things done in the midnight sun." (That's the opening line from "The Cremation of Sam McGee.")

There are, of course, strange things done at other times, too.

1. As many of you have already noted, there is a lot of "peculiar" weather this year. Normal patters appear to be skewed, for some reason. Global warming; a disruption in the "collective unconscious" —  who knows.

We had a fairly brutal storm a couple of nights ago. We received about four inches of rain over three hours in our city. The hail at the Bears' house ranged in size between marbles and golf balls. Residents' basements, whole neighbourhoods, and even civic buildings, were flooded — and not just in our community.

At one point, a few blocks from our home, the water flow and pressure in the storm sewer was so strong, the water blew the man hole cover off the service access. That sent water charging into the street, and cascading though a park directly to our river. The result was a huge washout, as you can see, on the path beside the roadway. 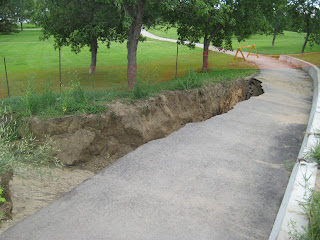 and runs all the way down the hill, through the park, to the river, which you can see in the distance.

We had another storm tonight, but it wasn't nearly as bad.

The washout, btw, is about two blocks from our son's house. He and his family were fine, as were we, and our daughter (who lives a bit further away, and on higher ground).


2. Canada Day is our national holiday. On July 1, 1867, the British North America Act came into force, and Canada became a Dominion within the British Empire (on which the sun never sets, I'm told).

Yesterday, all kinds of things happening around us, from pancake breakfast first think in the morning, to fireworks at night. Our grandchildren came for a sleepover, and stayed up until the fireworks started (which we didn't think they would). But after a few, they had seen enough, so off to bed and sleep.

In the process, they cut a few Canadian flags out of papers, and put them on a door and a windows. My flag continues to fly atop my flagpole; I think I'm the only one around here who actually flies a flag. (The bad news is that my flag is getting a bit tatty, and needs to be repaired or replaced.)


3. As at least some of you know, Bear has been a writer and broadcaster for quite a few years. And Bear loves telling stories.

But Bear is NOT a poet. I thoroughly enjoy poetry, but I'm not a poetic writer.

Well, at least not until now.

Rachel Westfall, a good poet, writes poetry on her blog. To encourage others to write or try poetry, she decided to hold a competition on her blog.

But not just ordinary poetry. It had to be about Bears, and it had to be Haiku (that particular form of Japanese poetry, consisting of 17 moras, in three phrases of 5, 7, and 5 moras respectively).

Since it was about Bears, this Bear thought, "Oh well, I'll give it a try,  just for fun, and see what happens."

So what happened? Rachel explained it this way:


"When I read the poems over and over, one author moved me in the way of the bear-spirit more than any other: Rob-Bear! Congratulations, dear Rob-Bear! Your bear in shining fur poem truly gave me goose-bumps (bear-bumps)?"

This is a bit strange, because I thought there were much better contributions than mine. But, hey; it's her blog, so we'll abide by her decision.

What did I write?

I'm to get a prize, and it will be a Bear sort of thing, which I'll add to my collection of Bears. Quite Bearable, all in all. Thank you, Rachel!

But Bear still sits and shakes his head. Me? A poet?

One other matter. This is my 200th post since I started blogging (in 2006). Bear figures if he works at it long enough, he may actually catch on to what blogging is. (There are so many really talented bloggers out there; some are included in my sidebar! And, yes;  there's one very prosaic, pedestrian Bear.)

Rob...you are one wonderful and poetic bear!! Love all your news! That's quite a "river!" And your Haiku is delightful! Happy Canada Day to you, albeit a bit belated!!! And have a wonderful weekend, my dear friend! Congratulations, btw! Hugs, Janine

I could understand Rachel's vote on that score, Bear. ;) When I read your poem, I instantly had an image of a lone bear on an elevated patch of earth, bathed in moonlight, shining and glowing like a forest spirit, then the last line where the bear sniffs for food and wonders, well that made the bear very real, grounded, corporeal. So, for me, you've portrayed a bear-spirit in, shall we say, a natural state. Hence the 'wow factor' in your bear poem.

Hope you have a wonderful weekend, S.L.

Ooops, Janine: I really do know how to spell yer name.

Nice poem indeed and having come face to face with a real bear, a long time ago, your bear is very real.
Thanks for listing poor little me as a bloger...but I must admit I'm not so sure that I'm one.
A scribbler, yes, a bloger?

Last Tuesday evening we had 25mm of rain in about 15 minutes. Gall force winds overturned a few cars and and destroyed some structures in the Walmart's parking about a kilometer from here.
We lost power at 20;15 and it came back at 2;35. The freezer was up to -3 and the fridge was at 13.

I love your haiku, a well deserved winner I'd say!

And that is quite the drainage ditch.

® Potsoc: That sounds like "inclement weather" all right, Paul. Glad you survived. WalMart can afford to rebuild.

® Cait: Thanks for visiting; thanks for the supportive comment re the poetic Bear.

BTW: SAF needs a Livestock Specialist in PA. Interested?
I didn't think so.

® Paul: Sorry I missed your first comment. Scribbler? Blogger? Journalist? It's all on a continuum of sorts. Working and playing with words.

The story is told that, when Shakespeare was young, he threw a temper tantrum in iambic pentameter. We all have to start somewhere. (Hope I haven't confused you.)

Confused me, not at all, I'm all ready quite naturaly confused. So relax and enjoy.
That Shakespearean tantrum I would have liked to witness. Probably not true anyway.

Loved your haiku Poem, Bear. Congratulations on being a winner.