It wasn't so long ago that Nuala and Sadie came to live with us. 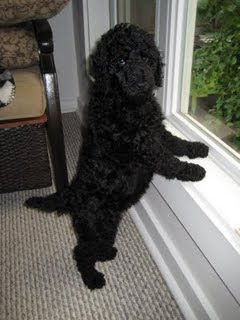 (Nuala at two months; 10 pounds)
Well, the puppies have grown up. Instead of just sleeping in the back porch, Sadie uses it as a guard tower. 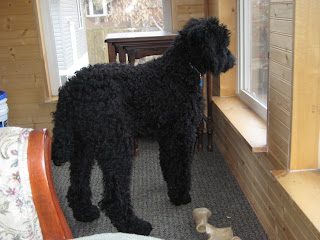 (Sadie at five months; almost 45 pounds)
Sadie is (usually) a good dog; she has a lot of things she likes.

5. "Playing" with her sister, Nuala (though they play pretty rough).

7. Watching the geese on the river.

10. Watching other dogs, and trying to play with them if they get close enough.

11. Trying to play with people, if they get close enough.

13. Playing with her toys, and chewing on bones and chew sticks (especially if someone else holds the end of the chew stick).

14. Watching workers in the community.

15. Chewing on spruce cones. (There are lots of spruce tress in our area, which grow seed cones. And seed cones fall to the ground. Sadie loves to pick them up, carry them around, chew them a bit, then drop them. And pick up the next cone she sees.)

16. Did I mention going for walks -- morning, afternoon, evening, or night?

And one other thing. 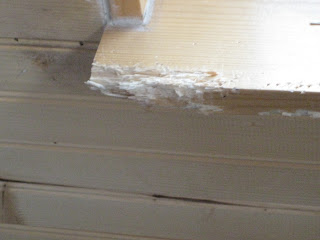 17. Chewing on things she shouldn't be chewing -- like window sills that are close to the floor. (But she only does that when bored, meaning I've left her too long).

NO! She is not for sale.

She's so beautiful, Rob!!! That guarding, and looking out the window? So endearing!!! Hugs, Janine

® Janine: I'm sure you'd love her up close, too -- as long as she doesn't lick you to death. Or chew off a couple of fingers (if you don't have a toy or chew bone for her). After your "introduction," she'll probably settle down and got to sleep at your feet.

What a beautiful dog. Window sills?!!! oops Oh well at least there will always be little reminders left of when she was little [if she ever was little!]. We still have a mat where one of our little darlings chewed the corner off....happy memories hehehe A x

she is probably teething and needs to chew to knock out the milk teeth. sorry if I'm pointing out the obvious. As for the spruce cones - do they pass easily through the digestive tract?

Sorry to sound like a worrier but when it comes to growing dogs I am.

I do love her face! That top, 'Who Me? No, I'm not even going to THINK of chewing a window sill' expression is priceless!

My dogs chewed up the backs of some of my books, the corner baseboards and a few other odds and ends of things.

With reference to your comment on "Freedom's Just Another Word", I hope you are continuing to train them to chase dicks into the river.

I agree with French Fancy - she is probably teething.

® BF: Thanks for the encouragement!

® FF: Sadie doesn't actually eat the spruce cones, she just carries them around and chews on them for a while, then drops them. I don't think she likes the taste, but they are chewy!

® Wipso: Sorry I missed you. Nothing that a little sandpaper and wood filler won't fix. But not right away. In a few months, maybe.

Haha! My bookshelves look a bit like that, only I blame the rabbits. Your dog is lovely!