Those are magical words in Sadie's ears.

For those of you not familiar with her story, Sadie came to our home to walk me.

(Now, mind you, that's not the whole story, but it's a good beginning.)

Well, I'm glad you asked, because I'm going to show you. 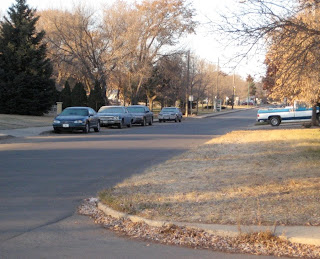 At the end of this block there is a park, which I've mentioned before. (We'll turn left and head south.) 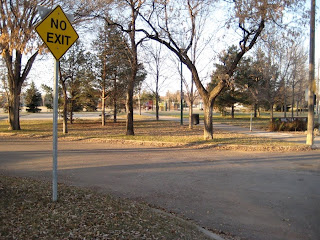 On the east side of the road is Abbeyfield House, a home for seniors. I have known the manager for a number of years; one of the staff I have known (through Scouting) since our earliest years in Saskatoon. 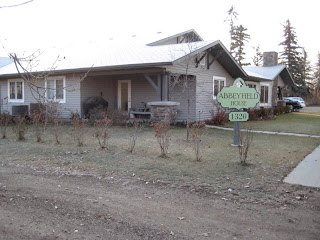 Across from Abbeyfield, the Park continues. (You've seen the reverse angle of this picture.) 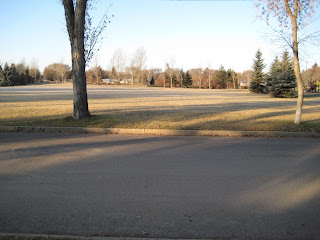 At the end of the block, we get to the Bowerman House. 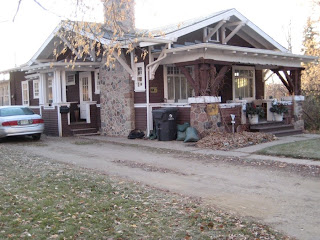 This was the "hunting lodge" of Allan Bowerman, head of one of our city's early prominent families. It was quite a bit outside the city when it was built (in 1907), at the edge of a ravine, not far from the river. 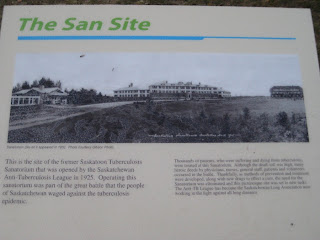 It's 1925, and a Tuberculosis Sanatorium is built next to the Bowerman property. It was far enough out of the city to be "safe" but close enough to be easily serviceable from the city. Bowerman, a land developer, had sold the "lodge" a few years earlier, when the city went from boom to bust. The home became the residence of the Sanitorium Director. (That land from the Bowerman house, up to and including Abbeyfield House, held residences for other doctors at "The San." ) 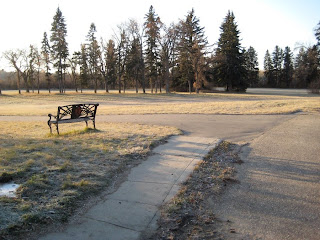 (Site of the former main buildings at "The San.")
When the buildings were demolished in the mid 1980s, the arrangement at the time is that this would stay a park, and no new buildings would go up, except where that had already been buildings. One building has now been put in place. 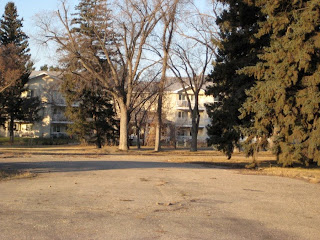 This is on the west side of the property, where the Nurses' Residence was located. (In one of the congregations I served in the city, there was a woman who had been a nurse at The San during WW2.) This building has some of the outline features of the old residence. (The architect must have done his/her homework.)

This is a low-rent public housing project. Very nicely done. Not at all your typical "Council flats." 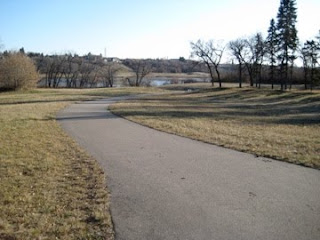 We turn our backs on the housing, and walk the trail to the south-east, until we come to the river. 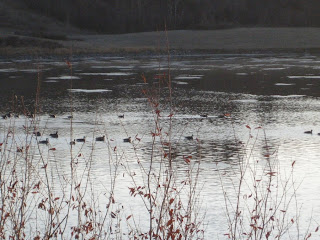 There are still a few geese who have not left, yet. In fact, there will be geese on the river all winter. A mile (more or less) upstream from here there is an electricity generating plant, named in honour of HRM Elizabeth II. The "Queen E Power Plant" (as it is known locally) used coal to generate power through turbines. Those were converted more recently to natural gas. But the plant still needs water (primarily for cooling, I understand). So cold water is taken out of the river, and it is replaced by warm water. No pollution, I'm told; just water exchange. Hence, the geese have a relatively nice place.

You'll also notice ice pans beginning to form on the river. That starts at about -10°C. If we get warm weather, those little thin sheets disappear. But in the cold of winter, the river will freeze right over, except for openings where the current is strongest.

From here, we turn left, and head north for about half a kilometre. 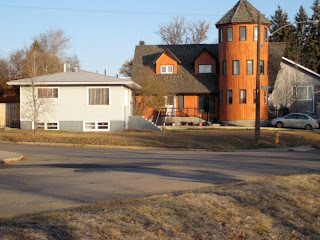 The "Turret house" is interesting. It was built as a modified A-frame house. The original owner, so the story goes, had a piano, which was to move to the upper floor. But the stairs were not big enough. Hence the turret was added on, so the piano could be hauled upstairs.

To this point, we've travelled about a kilometre. If I want to cut the walk short, particularly if I'm having trouble walking, we can turn left here. Our property is located across the back lane from the Turret House, so we're within 100 yards of home at this point.

Why only Sadie? Does Nuala not come with you? A x

Very,very cool. I love to see how other people live, and your neighbourhood is both beautiful and interesting. Thanks Rob.xx♥

Thanks for the walk - most enjoyable - I like to know where I am and what I am looking at. I might try the same thing myself one of these days.

® Wipso: Nuala walks with Momma Bear. That way we all get exercise. If they walked together, they'd be "fighting" all the time, not walking

® Natalie: Glad you enjoyed the first part of the trip. The second part is more walking and less beautiful.

I used to walk Viki and Monty on those "elastic" leashes so they could run back and forth and stop and check things out. They would get into a "fight" and braid the lines up then unbraid them again. It was fun for them and me. I preferred them off leash because they could run but they were bad puppies and ran where they were not supposed to. Also it was against the law.

How lovely to see your neighbourhood - so much space!!

Thanks for the tour, and the exercise, too! Your local history lesson is very interesting. I could walk several miles in this city (even in Central Park) and never find the tranquil atmosphere that appears in your photos.

I love that turret house - I've got a thing about them. You often see turrets on houses here.

Hope your pain is manageable atm

® BF: Now you know why we walk them one at a time. We have off-leash parks, now. We don't trust our girls to return when called.

® Reasons: Yes, lots of space. Civic rule -- every neighbourhood has to have a park. Some are more developed than others, but ours is nice. I'll do a piece on the park at some point.

® Frances: Well, you've done some wonderful local history on your blog; I'm just returning the favour. That post about the quiet little garden space was lovely.

® FF: Having each of us walking one of the two poppies at different times or on different routes works well. And the pain is, . . . well, it's a constant companion, and it is manageable, thusfar.

Interesting. Do you walk the same route all the time or do you vary it?

It's interesting to see where you live. So spacious, such wide streets.

What an amazing park and what forethought to say it should stay as one too. I like the fact your home is 100 years from the Turret House it conjurs up an ability to not just take a walk but take one through time!

® CW: The simple answer is "No." I'll explain that later. There are a variety of options available.

® lampworkbeader: "Spacious" is common in the "wide open spaces" of western Canada. Standard road allowance is 66 feet -- though the streets are not necessarily that wide.

® Rose: sorry I missed you first time around! This is a quick introduction to part of my life.

® TW: Actually that should read "100 yards" -- I've corrected that error. My failing eyesight presents challenges. (Our house was built in the 1950s.)

What a beautiful and historic walk you have!!!! Yes, "walk" is a magical word for both Master and mutt ;-) I loved sharing your walk, and look forward to the next installment!! You live in a lovely place!! Hugs, Janine

® Janine: It's lots of fun, especially when I know some of the local history. Least I can do in my own neighbourhood.