To V or not to V? That is the question. 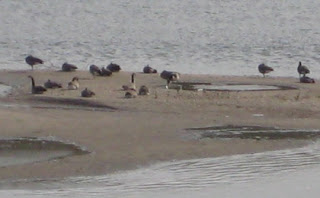 The day before I took these pictures, there were about ten times as many geese on the sand bars. (Of course, I didn't have my camera with me!)

We have hundreds of geese that nest on the sand bars every year; hundreds more stop here on their migration south.

I'm still waiting to get a good picture of flock in flight, in their typical "V" formation. It's quite magnificent. These were "talking" about it; a couple did a bit of a "test flight," but the group wasn't quite ready to move on. Perhaps they were waiting for others to join them.

The snow which had fallen a few days earlier was mostly gone, but the temperatures were still around the freezing mark.
picture

They know just exactly when to take flight. I'll be seeing you when they pass over this lake of mine.

Speaking of "V"s, have you ever noticed that when geese fly in a V that one side of the V is always longer than the other? Do you know why that is?

When geese fly in a V, why is one side of the V always longer than the other?

® Rosaria: I do hope they get as far as your place. My fear is that Homeland Security will shoot them down as unauthorized aliens.

® BF: I have indeed noticed that. The reason: 'Tis the nature of geese. Probably related to the drag coefficient in the flight pattern. What? You want a more thorough explanation? OK -- I'll look into it. There must be somebody at the University who knows something about this. I think. Maybe.

Actually the reason one side of the V is longer is that there are more geese on that side.

® True, BF: but are they on the Right side or the Left side? Such complicated issues you raise.